This post is the first in my Dance to the Music of Time series.  A quadrille requires eight dancers, in this case eight aristocratic irises bred by the Cayeux family, in France.   This post is really a homage to a family who over four generations have pursued their ideal of ever more perfect bearded irises.  I’ve witnessed the perfectionism involved, having spent an afternoon in the iris seedbeds with Richard Cayeux as he searches for the handful, out of acres of plants, that will merit release.

To start with, some historic beauties: the first of the four generations (so far) to have run the Cayeux nursery in France, was Ferdinand Cayeux (1864-1948). Remarkably, he produced 10 Dykes medal winners in as many years (if you haven’t heard of the Dykes medal, all you need know is it was the top prize for bearded irises and most might dream in vain of winning it once in a lifetime). In another post I have featured Ma Mie, a very beautiful plicata he introduced in 1909. Here I am focussing on four irises bred by Ferdinand Cayeux in the 1930s.

The pursuit of red in irises has been a long-standing preoccupation of hybridisers and there was a particular flurry of activity in the 1930s in that respect. Député Nomblot (1929) is a rich pink and red bi-tone, very similar to Dauntless, which won the Dykes medal in the US the year Député Nomblot was introduced. Député Nomblot duly won the French Dykes medal the following year, in 1930. It has small, well-shaped flowers and the bright yellow beards add a pretty contrast to the plum red falls. 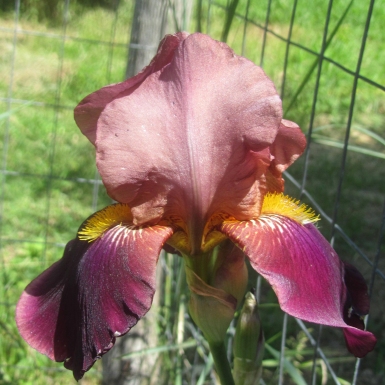 In 1931, Ferdinand Cayeux introduced Marquita, a very beautiful bi-colour with ivory standards and falls of an ivory ground delicately striped with watermelon pink. This won an Award of Merit and remains deservedly popular today. It is one of my personal favourites, endearing itself to me for its ability to form a large, floriferous clump very quickly and for the length of its flowering period.  (Incidentally, in the bottom photo below, Marquita is on the right and on the left is Paillasse, a variation on the same theme bred from Marquita and introduced in 1936: the standards are darker as are the falls.) 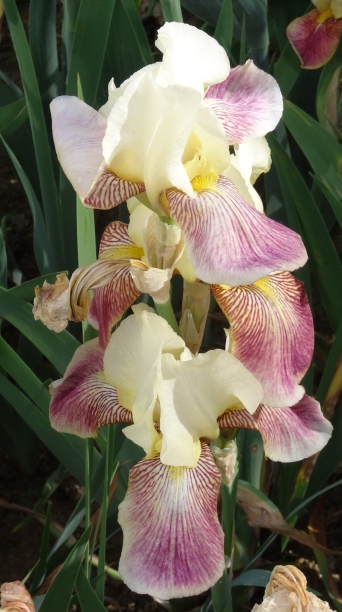 1931 also saw the introduction of Jean Cayeux, named by Ferdinand for his grandson, Jean (of whom we’ll hear more in a moment). This iris is a subtle, pale golden brown and was another of Ferdinand’s ten Dykes medal winners. At the time the colour was a great novelty and Jean Cayeux was much used in breeding. It can look startlingly different in different light. Who knew that beige could be this interesting? So far, mine is not hugely floriferous but that may be because it needs some time to get its feet down.

In 1936, continuing the theme that brown can be sexy, we have Louvois, a rich brown bi-tone and winner of the Award of Merit. I’ve seen writers liken the colour of the falls to the pelt of some wild furry creature – but I tend to think of chocolate (milk chocolate for the standards and the darkest 80% cocoa for the falls). The RHS feature this iris in their suggested planting schemes for historic gardens and one can see why. It has real presence whilst also being a very good mixer. Shown below with Cleo Murrell (Murrell, 1941), a pale yellow and mauve blend.

Moving now to our four dancers from modern times: three of these are introductions by the same Jean Cayeux we met as an infant a few paragraphs ago. (For an iris registered by his father, Réné, see this post, featuring Seraphita.)

The first of these is Provencal, introduced in 1976. The flower is more historic than modern in form: tailored and with only a subtle degree of waviness to the edge of the petals. The colour is very striking: when the light falls on the petals, it is a rich brown plicata on a golden ground, and when lit from behind it positively sings out across the garden in a dazzle of red and yellow. It is very robust, vigorous and floriferous. It won “Iris of the Millennium” at Franciris and I for one would agree that it should make anyone’s shortlist of truly garden-worthy irises.

Two irises that Jean introduced in 1991 also win places on that shortlist.

The first of these is Alizés, a blue and white Amoena. Now that is a very over-crowded class so why would you still want to grow Alizés? The flower is, to my mind, perfect in form. Enough ruffling for interest but not so much that the flower struggles to open properly (as happens with some of the more extreme recent introductions). The standards are a particularly pure white, the falls an especially beautiful sky blue with a white centre around the clear yellow beard. Altogether a very fresh effect and it is very generous in its flowering. Its garden qualities were recognised by the award of an AGM by the RHS. 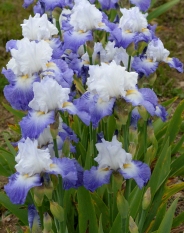 In the same year, Jean introduced Colette Thurillet, a highly decorative blend of warm colours: the standards a kind of custard yellow stained with mauve, the falls a blend of fuchsia pink, rose pink and fading to palest pink at the edges, set off by a vibrant orange beard. The colour combination is so unusual that it is unsurprising it caught the eye of the judges, winning a prize for the best new colour at Florence in 1997. It looks wonderful combined with white irises and some light blues, or (if you are brave) with pinks.

And finally, an iris introduced in 1997 by Richard Cayeux, Jean’s son, who now runs the family nursery in the countryside near Gien. Richard has produced so many good irises over the years that it is very difficult to choose just one. We have something like 160 different Cayeux irises in our collection. I will need to devote another post to some of my other favourites. However, of all of them, this one probably would be on my desert island list. And if you think of a desert island surrounded by the deepest blue sea you have the colour of this iris. It is aptly named Mer du Sud.

I am a sucker for a good blue and blues don’t get much bluer than this. It has good strong stems, never requiring staking, in my experience. The colour combines beautifully in many different planting combinations. I particularly like a bed, pictured at the top of this post and below, where I have it in combination with Erigeron karvinskianus (Mexican fleabane – a froth of white and pink), Romance (Cayeux, 2007, creamy standards with a pinkish flush, white falls with a blue edge, and a red beard) and Ravissant (Cayeux, 2007 – won the Gold Florin, standard white flushed with lilac, falls whiter with a lilac border).  Again, the RHS has recognised Mer du Sud as an outstanding garden plant with the award of an AGM. 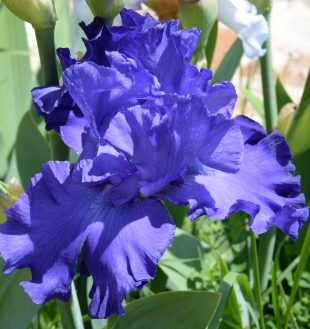 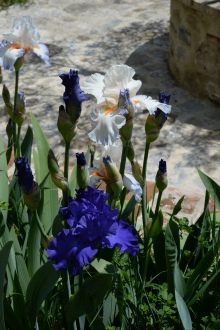 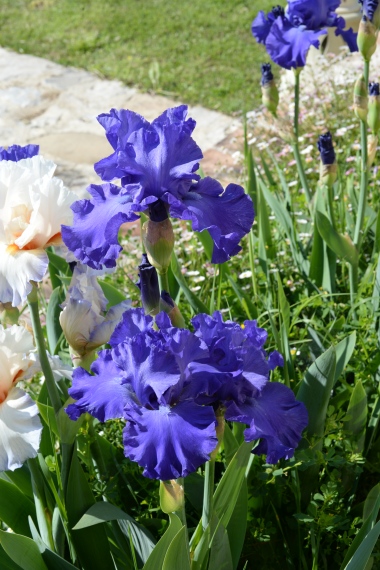 Next in this series: an Italian Tarantella (irises from Augusto Bianco).

We are a small specialist iris nursery and display garden in Umbria, Italy. View all posts by irisumbriablog

One thought on “A French Quadrille”

Things we are talking about